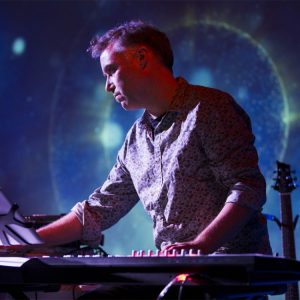 A soundscape artist and composer, Andrew Heath creates quiet, ambient, lower-case music based around piano, electronics and field recordings, drawing inspiration from a simple piano motif, an electronic shimmer or a processed found sound. The work he produces blends piano, electronics and found sounds into a mix that on the surface sounds quite minimal and open, but on closer listening, contains detailed fragments, constantly shifting and changing place.

“I remember as a small boy, watching a film about an artist who had made a sculptural piece of work that involved hanging large pieces of metal and wood inside an old barn. When one piece was moved it made contact with another until ever so gradually, the whole building was filled with random motion and sounds. I was fascinated by the serendipitous nature of this creation.”

Early collaborations using Fender Rhodes, piano and electronics with fellow musician, Felix Jay under the name Aqeuous led to the release of ‘Tall Cloudtrees Falling’ on Hermetic Recordings in 1995. This inspired a partnership with the legendary Hans-Joachim Roedelius with whom they collaborated on ‘Meeting the Magus’ in 1997. A late night performance in an art studio resulted in the ‘Entertaining Angels’ album in 1998, which was swiftly followed by their last collection, ‘Vortexia’ in 1999.

Andrew went on to produce a number of video and site-specific, sound installations. This re-introduced him to the technique of working with field recordings, often leaving in the sonic detritus that most would seek to eliminate as being ‘non-musical’.

In 2014 he released his first solo album, ‘The Silent Cartographer’ on Disco Gecko Recordings. The Ambient Music Guide hailed it as “environmental ambience of the highest order” and one fan went as far as stating that “if you’re one of the legion of fans hankering after the new Budd, Roedelius or Eno, quit waiting and immerse yourself in this”.

After asking visual and sound artist, Peter Maynard to collaborate on a pure soundscape installation, the two went on to create a huge body of improvised, minimal music that was released as ‘Dust’ and ‘Threshold’.

Following these releases with ‘Flux’, ‘Europa’ and then ‘Found | Assemble’ in 2017. Andrew also found time to revisit his previous Aqueous collaboration with Hans-Joachim Roedelius to create “After The Magus – to resound” in 2015 and recorded a concert they performed together at Stroud’s Goods Shed along with Christopher Chaplin in 2016. Released as ‘Triptych in Blue’. Crack Magazine loved the “stunning recordings …. which are delicate, wistful and supremely moving”, while Electronic Sound Magazine complemented them on their “sublime ambient/neo-classical compositions … each mesmerising track floating beautifully in astral space”.

Andrew also curated a mini-festival of improvised experimental music, bringing the French electronic duo, Kaumwald and Dutch ambient guitarist, Anne Chris Bakker to the event. The invitation to Chris, cemented a friendship and mutual admiration of each other’s music and early the following year, Andrew visited Chris in the north of the Netherlands for a week of inspired improvisation. A huge volume of work was produced, painstakingly edited over the following few months into Lichtzen which has just been released on the Japanese label, White Paddy Mountain.

His 4th solo album for Disco Gecko Recordings, ‘Soundings’, was released worldwide in November 2017 to a wonderful reception – ‘Soundings’ drew on the influence of many things but of great prominence was the landscape (and seascape) of The Netherlands – it’s wide, ever-changing skies and geometric land patterns bringing a wider more open sound to the music. Lastly this year, a spontaneous field recording trip was organised by Toby Marks to the wilds of Norfolk.

2018 started with a wonderful sound installation commission for an exhibition about the history of the cloth industry and the mills and workers that were a part of it. Then, quickly on with more live performances before continuing with what was now, a series of field recording trips to various locations across the UK. An invite to play in The Extreme Chill Festival in Iceland must be one of the most exciting things during this year… what a place! Amazing people and landscape – a truly unforgettable experience! Following this by the launch of his 5th solo album, Evenfall with an amazing concert in London.