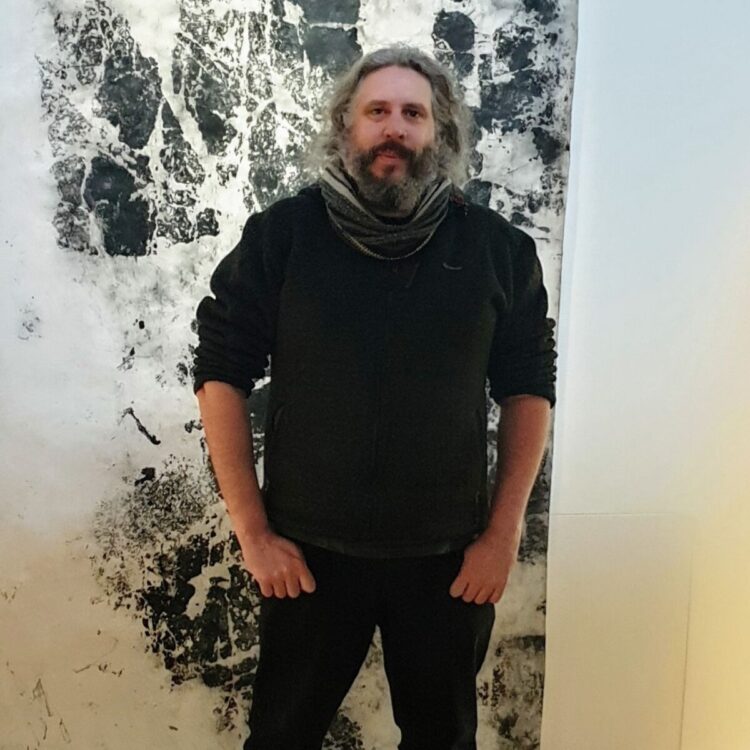 Flexagon is a Guernsey-based sound artist and musical instrument collector. He is an experienced DJ, music producer, sound engineer and composer.

His latest single, Fort Saumarez, is released on 16 December 2022, followed in February 2023 by the album The Towers 1: Inaccessible. Both are part of his ongoing Towers project based on the fortifications, structures and architecture of his island home. Much of Flexagon’s recent work is location-orientated and focusses on unique settings.

As a DJ, Flexagon is known for his long eclectic and psychedelic sets spanning multiple genres. Equally at home playing ambient and chillout as he is with house, techno and psytrance, his beginnings as a club DJ in the mid-90s provided years of experience playing varied sets to mixed crowds. Around this time he fell into the world of Goa and psy trance parties. As a punter at first and then as a DJ, this psychedelic music was the ideal afterhours alternative to clubland at that time. In Guernsey, this is the style of music Flexagon is best known for.

On re-entering the world of music production after a 10-year hiatus, his initial experiments and first album Helios were rooted in psybient and psytrance. As a producer, Flexagon’s music has become increasingly esoteric and wide-ranging, moving into ambient, downtempo and minimal realms. Along with this has come the opportunity to compose for orchestral instruments, his first piece scored for nine string players and piano had its premiere performance in 2018.

2020’s album, 7 Nocturnes East, is a series of ambient and found sound pieces, all inspired by and using location recordings of Guernsey places at night. The album was released in January 2020. Supported by the Guernsey Arts Commission, 7 Nocturnes East had an accompanying visual and video art exhibition featuring the work of seven artists at The Greenhouse, Guernsey Museum.

Flexagon took part in the Sounds for an empty house project in 2021, run by the Welsh art collective Plas Bodfa. His track Exploration I uses sounds from Katherine Betteridge’s recordings of the house, a violin, her voice and a tuning fork.

In March 2022, Flexagon collaborated with fine artists Bridget Spinney and Monika Drabot on Ghost Net, based around a large, abandoned trawler net that was pulled out of the sea by Guernsey fisherman. The exhibition – Capturing moments of transience, magnificence and wonder in nature, threaded with the insidious scourge of plastic – at Guernsey Museum’s Greenhouse gallery features his interactive sound installation. Flexagon used sound bites from popular culture with abstract musical motifs made with rubbish cleared from Guernsey’s coastline by the Clean Earth Trust. Triggered using motion sensors placed around the gallery, the resulting combination of sounds and music was never the same.

His forthcoming Polar Sounds track, PALAOA Dreams, is due for release in late 2022. Polar Sounds is a project by Cities and Memory re-imagining some of the little-heard sounds of the Antarctic and Arctic regions.

Flexagon’s work with other musicians and music creators includes remixes of work by Continuum, Sephira, Blakalaska, Citizen-X and Buffalo Huddleston. He was the first artist to officially remix a track by tribal industrial band This Morn’ Omina. The song Drifting (Into the Light), written and released in collaboration with Mike Mienke of Buffalo Huddleston, had airplay on BBC Radio 1 and BBC 6 Music.

An active member of Guernsey’s varied music and festival scene, Flexagon is no stranger to playing in the UK. He has performed DJ sets at Noisily Festival, Triplicity, Inertia, Elemental Productions and Psyberdelica, and regularly played long DJ sets at London’s sadly now defunct InSpiral Lounge in Camden.