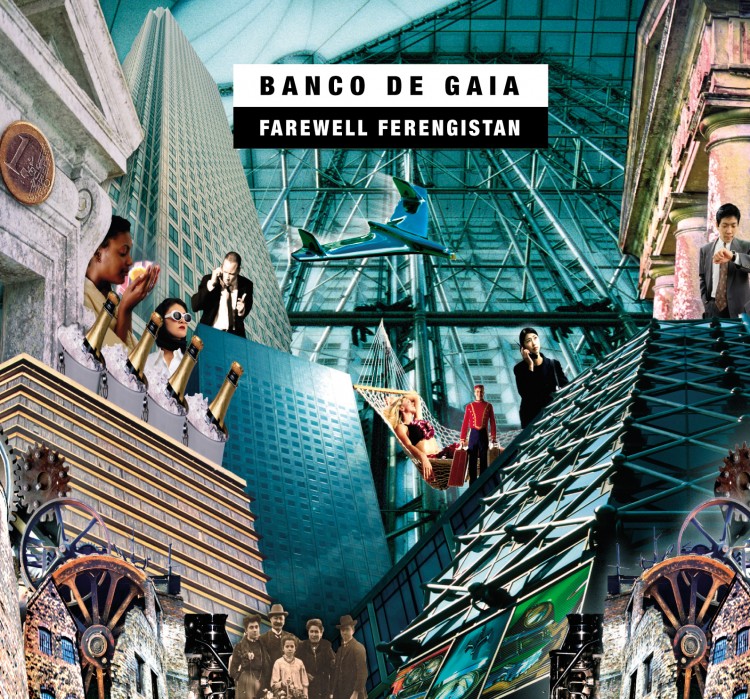 Toby Marks under the pseudonym Banco De Gaia has spent most of his career focusing on issues that he finds bewildering by expressing his thoughts and observations through music. The electronic musings of an ‘abstract techno/dance’ composer are not traditionally associated with an impassioned political polemic or works of merit and depth. However, his critically acclaimed 1995 album Last Train To Lhasa was written to highlight the plight of the Tibetan people and successfully mixed electronica with a braver vision, although Banco de Gaia himself has lost count of the number of times people have told him that ‘dance and politics’ just don’t mix. There are no ‘themes’ in dance music, just beats and hooks etc.

Fast-forward to 2006 and over a decade of questioning and consistently brilliant albums under the bridge later and here we are facing the same joyfully unsettling creature. Farewell Ferengistan captures the spirit and mood of Last Train To Lhasa but this time instead of being concerned with the remote tribes of Shangri-la, Banco de Gaia’s concerns are much closer to home: what are we doing to ourselves? Where is our materialism taking us, would it not be wise to consider our position?

“Ferengistan” is a word of uncertain origin, it could be Arabic, German, Byzantine or Greek. In Central Asia, it’s common meaning is as a reference to the home of Westerners and Caucasians. It has connotations of greed, materialism and untrustworthiness. So by saying “Farewell Ferengistan,” Banco is noting the decline of the era of the prospector, the chancer, the banker, the investor, the shareholder and the structures and systems of the corporate world. We must all in the end face the fact that commerce has consistently been doing ‘it’ on its own doorstep and that we cannot continue the way we have been because ultimately we are running out of resources and people to steal from.

The album also pays attention to nature and its beauty through tracks like “Ynys Elen.” Elen is an Ancient Celtic Goddess, considered by many to be the guardian Goddess of Britain. Often depicted as radiant and fair Ynys Elen is the Welsh name for Lundy Island in the Bristol Channel. “Kara Kum” is a large desert in Kazakhstan. “Chingiz” deals with a law passed in 2004 by the Mongolian government stating that all citizens must adopt a surname, a practice outlawed by the Communists in the 1920s. The new law was to simplify administration, as well as discourage familial inbreeding, but the plan caused more problems than it solved when a large part of the population chose the same name ‘Borjigin,’ the clan name of Genghis (or Chingiz) Khan.

“The Harmonious G8″ (ironic title) was inspired by the 2005 summit in Scotland. One singer from each of the G8 nations was asked to perform a short improvisation. The only precondition was that each singer finish on the same note; the singers recorded their parts without even knowing who the other singers were, let alone what they had sung. One would expect these unrelated recordings to sound chaotic if they were ever played together, but they’re not! “Saturn Return” is about the period between twenty-eight and thirty when Saturn completes its cycle by occupying the same spot that it did at the time of our birth. “Flow My Dreams, The Android Wept,” is based on science fiction writer Philip K Dick‘s favorite piece of music, a 16th century aire titled “Flow My Tears” written by English composer John Dowland. “White Man’s Burden” was a term coined by Rudyard Kipling and referred to his belief that it was the destiny and divine duty of European Christians, and the British in particular, to bring civilization and the word of God to the heathens of the undeveloped world. It is a tradition perhaps continued today by certain world leaders who believe they have ‘a mission from beyond the stars’ to bring ‘freedom’ to all mankind. Toby suggests that you will notice that both George W and Tony Blair have spoken about their relationship with ‘God’ in recent times.

Farewell Ferengistan is an album about humanity’s global predicament. After a decade and a half of music making it is great to see that Banco de Gaia remains as brave, experimental and willfully on his own path as ever. Toby Marks is someone who has influenced many musicians. In the U.S. particularly and across Europe, Banco de Gaia is respected for the innovator that he is for making records of consistent beauty and quality.

The music on Farewell Ferengistan is the mixture of exotic and urbane we have come to expect from Banco de Gaia. Opening with the down-tempo title track, featuring Indian vocals and haunting treated piano, Toby then nearly heads into rock territory with “Ynys Elen” until the Indonesian flutes remind us whose record this is. “Chingiz” presents an uptempo ska-fuelled workout followed by a slightly slower but no less insistent “Kara Kum,” with its repeating guitar motif and overwhelming bhangra percussion. The heart of the album is “The Harmonious G8.” The 8 improvised vocals here are overlayed and entwined in such a way that surely it can’t be a purely accidental beauty which results.

The tone of Farewell Ferengistan turns mellow and reflective. “Saturn Return” takes the listener on a widescreen space shuttle launch to the outer planets in the company of Steve Reich and Terry Riley, then deposits us on the set of a spaghetti western version of 2001-esque “Flow My Tears, The Android Wept” where a lonesome computer sings a 17th century ballad to a flamenco dub accompaniment. The mood remains ambient as an English pastoral landscape merges with Himalayan melodies in”White Man’s Burden” until submitting to the relentless march of progress and percussion. The hint of menace brings listeners back down to earth in time to be washed clean by the sublime vocal harmonies and timeless truth of “We All Know The Truth (You Have God),” the perfect exit music for this movie.