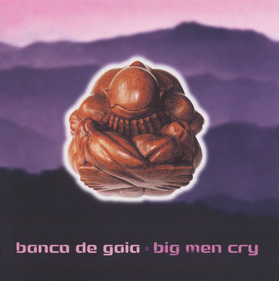 Big Men Cry is considered by many to be the undiscovered masterpiece of the Banco de Gaia catalogue. The album’s original release was surrounded by chaos, due to myriad problems at the label (which soon after went bankrupt). As a result, despite getting airplay from Pete Tong and Annie Nightingale on Radio One, amongst many others, Big Men Cry never really broke through like it’s predecessors, Maya and Last Train to Lhasa.

Which is a shame, as the album contains plenty of stellar moments, and was described as both “the perfect soundtrack to a little candle-lit bath time fun”(Big Issue) and as if “Pink Floyd had invested Dark Side Of The Moon with just one ounce of dub”(Muzik)! Raindrops, ethnic wails and pounding beats sit alongside bagpipes (Drunk as a Monk) and violins (Big Men Cry) while Dick Parry from Pink Floyd adds his trademark saxophone sound to Celestine. Fans of the film Pi may also recognise the track Drippy which featured in it.