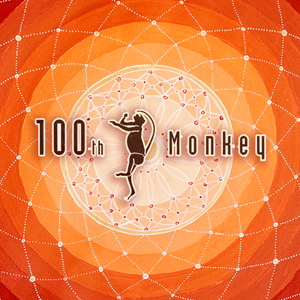 100th Monkey is Andy Guthrie, who has co-produced Banco de Gaia, Children of the Bong, Medicine Drum and Matsuri Productions to name a few.

The name 100th Monkey comes from research conducted in the mid-sixties by four Japanese primatologists into the eating habits of monkies across several separate Pacific islands. The researchers found that a concept or skill learned by a few could spread almost overnight to the rest of the species across long distances provided a critical number of individuals was reached. This was later picked up on by Lyall Watson who gave the concept the name “the hundredth monkey phenomenon”. The point being that a new skill or concept can be accepted into the gene stream and affect evolution provided enough individuals acquire it. So proving that whatever we think or learn affects the collective unconsciousness… probably.